Reading this in your email? For easier reading – Click here.

Here at Green Mountain Timber Frames, we do more than save and renovate antique barn homes.  We like to take on a variety of projects to keep things interesting, to help out a friend or to support our local community.

At times, we’ve built gazebos. And we’ve been known to raise a glass and timber lean-to (a glamper’s delight!)

In a recent project, we were asked to help straighten up a leaning flag pole here in our hometown of Middletown Springs, Vermont. The flag pole was originally carved from spruce wood, harvested locally here in Middletown and erected on the town Green in 1947. 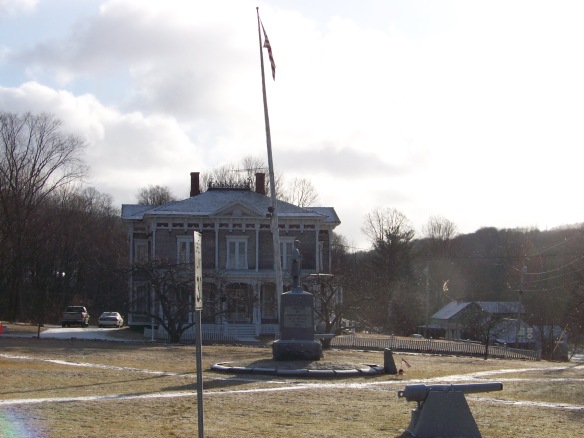 The pole has stood tall in the center of town for seven decades; but as the wood fatigued, it was starting to look a bit weary. (Apparently one too many Vermont winter winds had sent the pole leaning a little too far to the north.) In any event, our local Community Church – which owns the Green – made plans to set the pole straight, just in time for the Church’s participation in the 2016 National Day of Prayer, and the town’s annual Memorial Day Parade.

We began by releasing one of the steel pins that secured the flag pole to its concrete support frame. Then, we used a lull to lower the pole. 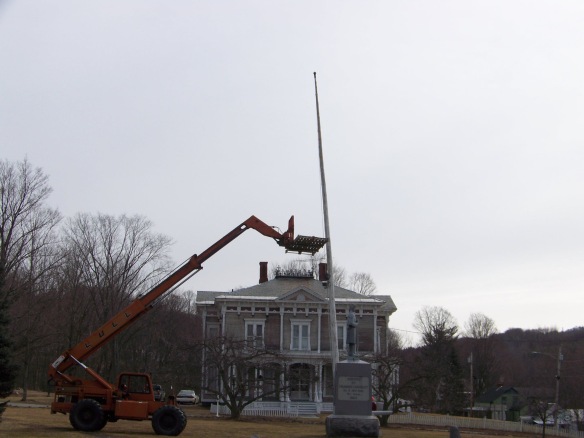 Below, you can see the lowered pole, with the Middletown Springs Community Church in the background – Dan’s family church.

This was actually the second time Green Mountain Timber  Frames had lent a hand to straighten this flag pole. About 10 years back, we had lowered the pole and removed four feet of aging wood and put on a new coat of paint. This time around, we cut off another four feet before hoisting the pole up once more – good as a nearly 70 year old wooden spruce pole can be!

Below is a picture of the piece of wood we cut off. You can see the fatigue that caused the pole to tilt four feet out of plumb. Ready for the burn pile.

In just about an hour’s time – and with the help of  two tractors – the slightly shorter pole,  now 46 feet tall,  was raised again.

That is Green Mountain Timber Frames’ shop in the background. Built in 1806, it was originally a Baptist Church.

Members of the Community Church gathered round the newly raised pole for the National Day of Prayer on May 6, 2016. 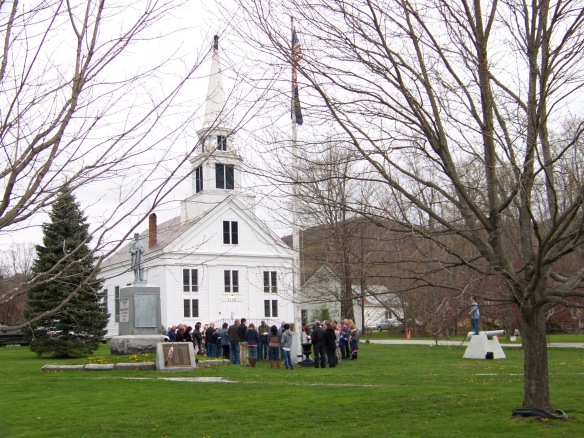 And here’s a shot of our very own Dan McKeen and his ‘children’s band’  strumming ukuleles on a float in the Memorial Day parade!

In this final image, you can see the original strong concrete pillars that secure the pole in place.

Meanwhile, we’re ready with another 70 year solution to the fatigued pole. We are in the process of cutting down and skinning a brand new pole made of local larch or tamarack wood. Within a year, we plan to dry it out and permanently retire and replace the current old timer.