Last fall, we were way Down East, tipping up a beautiful frame on the coast of Maine. Fast forward a few months, and the crew of Green Mountain Timber Frames found ourselves a world away, this time delivering a restored frame to Whidbey Island, off the coast of Washington State.

Our talented building crew traveled west to deliver this 28 x 38-foot frame from the 1700s to a wonderful client. The gambrel style barn frame will be a beautiful new home, made from these historic timbers. We had restored the timbers back home in Vermont and then carefully prepared each beam before tying the frame aboard this flatbed for the long drive west.

Out on Whidbey, we found a sweet Air BnB on the island and had the privilege to wake up to this view each morning:

Here’s a look at how we tipped up the frame, and the progress we made each day. On Day 1, we began with a pre-raising blessing. Then, we spread out the posts on the deck before tipping each one up by hand. The frame had four 28-foot girts. You can see us placing one of them below, with an assist from a telehandler. 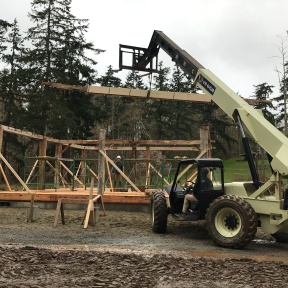 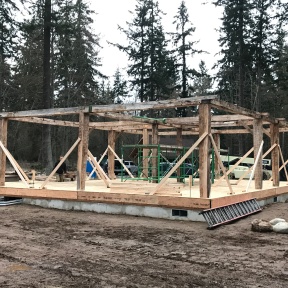 Let’s get a closer look at these beams!

Closeup on the Gunstock Posts

Notice how the gunstock post tops each have two tenons. One locks into the top plate on the eve wall, while the second receives and holds the girt that crosses the width of the building. The girt end also has a half-dovetail that further holds everything together.

Below, you can see the gunstock post standing strong against Washington State evergreens. A friend came by to use it as a perch and take in the view. 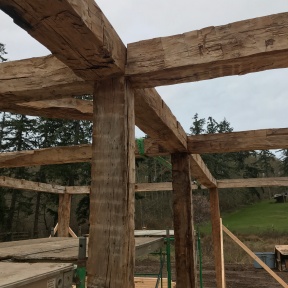 There is a 38-foot chestnut timber that runs down the center of the structure. It is half lapped over the 28-foot girts, creating a beautiful joint over the central posts. In the top right picture above, you can see the labeling in the beams. The original builder created these marks using a small gouge chisel.

By the end of day two, we had completed the second floor deck and were ready to begin installing the queen system, which will support the rafters and frame the space for the second-floor bedroom and bath.

We spent the next two days working on the upper cube (the Queen System) of the frame and preparing to put up the rafters. We installed the heavy three-inch beech planks that run the length of the eve. The rafters sit on this overhang. The queen system, which supports the rafter pitch change on this gambrel, has eight more gunstock posts as well as two more 38-foot timbers and four 22 foot queen girts.

On the right, you can see how the heavy eve planks are half lapped to each other, and pegged to the overhanging floor joists and girts. In the upper queen post to girt connection, we added a hidden steel plate and threaded rod that will reinforce the good work of the wooden joinery to ensure that the roof can never spread.

The next step was for us to install the rafters and apply the vintage roof boards. Under clear blue skies, we finished up the project.

We had a wonderful time on this project and made some new amazing friends on Whidbey Island. The building wrapped up with applying vintage roof boards on the structure, which we covered with tar paper for weather protection. We also installed the original, arched-collar ties. We are so grateful to the craftspeople from the late 1700s who built this frame, all who helped us to save it from demolition, our friend and client in Washington, and to the crew who will now close it in and make it into a home. 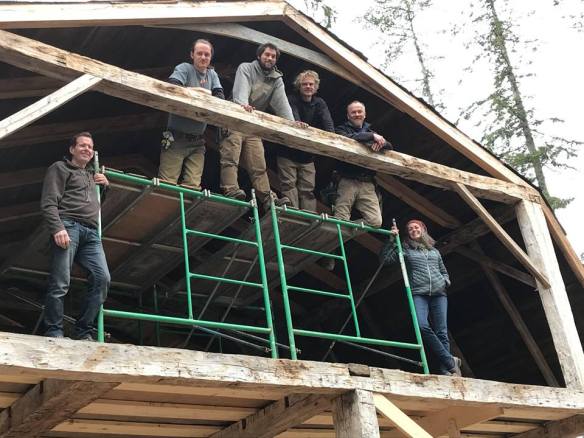 If you dream of living in a historic home, let us know! We do travel and would love to build a beautiful timber frame home for you.

2 thoughts on “Way Out West: Timber Framing on Whidbey Island”