This fantastic 18×20 corn crib was used to store the vitally important corn and grain that were grown on an historic farm in Rupert, Vermont.

This structure has tipped walls, meaning that it was purposely built with the eve walls tipped out to be wider at the top than the base. This technique was used in the 1700s and first decades of the 1800s to keep rain running away from the valuable contents of the barn interior. You just can’t be too careful about protecting the food that will get you through the next winter!

Come Inside this Historic Corn Crib

The barn was entered via this gorgeous door with hand wrought strap hinges. Once inside, there were high bins on either side. Hardwood 4×4 studs created the structure of the bins, which were approximately 3-feet wide and 9-feet high. The board walls of the bins had been removed before we arrived, but the elevated and slatted floors were still in place that kept air circulating all around the food that was stored in the bins.

Immediately to the left of the entrance door was a steep staircase up to a central loft. Ears of corn could be carried up and dropped down into the bins for retrieval throughout the long Vermont winters.

In the next photo, you can see some corn kernels that we found under the loft floorboards. I am so curious about the age of these corn seeds! They could be from a crop that grew 200 years ago so, of course, we saved them.

There are unique, full-length beams, which run the length of the structure. These hand-hewn timbers established the width of the bins for corn storage and also framed the edge of the central loft. In the next photo, you can see where this beam is lapped over the girt.

The care that was given to the chamfers in this joinery where it is notched over the center bent is spectacular.

We were also stunned by the beauty of the handcrafted rafter tails. They protrude out beyond the eve beams to create a gorgeous overhang that further protected the valuable corn from the weather. 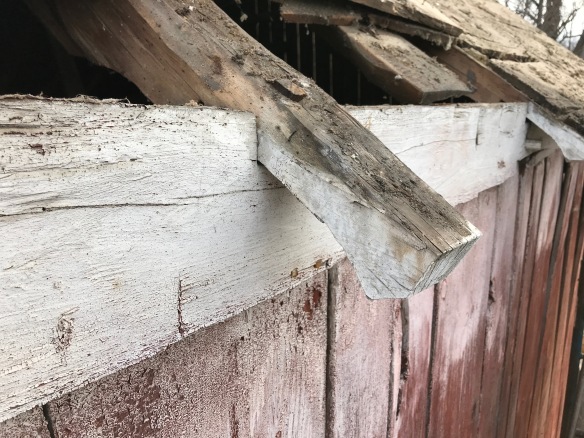 Holding the Roof in Place with Rose Head Nails

At the dawn of the 1800s, iron was a valuable commodity, and it took a lot of work to forge nails by hand. In the next photo, you can see a few of the original rose head nails that were used to hold the roof boards in place. 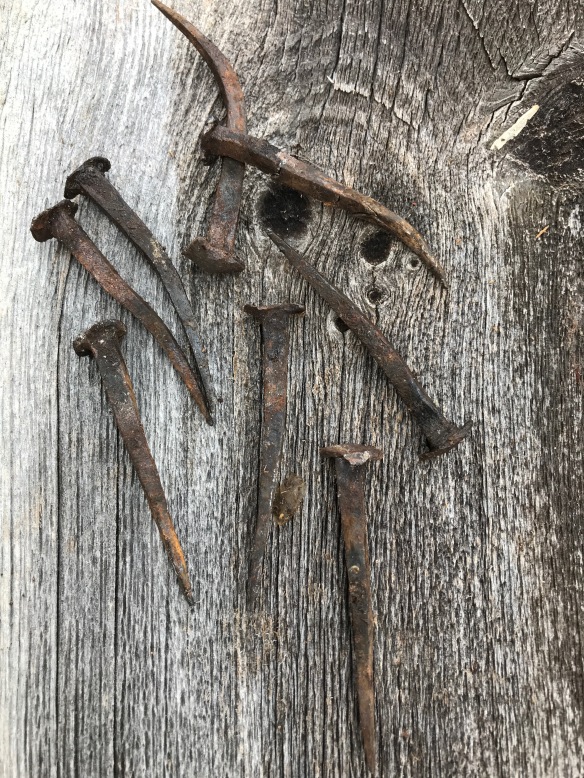 In light of the value of nails when this frame was erected, the top plate (eve beam) was set with an overhang and carefully channeled to receive the top of the vertical siding boards. This was yet another detail that protected the interior from moisture. The top of the boards was carefully chamfered so that they would fit tightly into the groove in the beam. No nails were needed at the top of the siding boards because they were fit so tightly into the channel.

The Important Role of Hardwood Pegs

The main fastener used was, of course, hardwood pegs. These beautiful wooden dowels have held strong for over two hundred years, and it was an incredible experience to pop them out and contemplate the fact that they have not been touched by a human hand for so very long.

We have had so much fun discovering the particulars of this vintage timber frame, and feel so lucky to be involved in saving it to be enjoyed by future generations. In the next photo, Jesse and Andy stand next to one of the center bent posts.

After labeling and stripping the roof boards and siding, we started popping the pegs and disassembling the joinery. Here is some of the crew after we lowered the first bent to the ground.

Once the bents were on the ground, we disassembled them and labeled the individual beams and braces.

There were two extremely friendly maple trees that have been hugging the granary for many years now. We used one of them, along with a block and tackle, to lower the bents to the ground. In the following video, you can see how we did it with the help of that maple tree.

Restoration Plans for the Rupert Granary

We will be restoring this adorable little frame over the coming month and we are excited about its future somewhere on a new foundation where many future generations of humans can enjoy it.

Speaking of enjoying and using this granary, here is a beautiful photo provided to us by the property owner of someone else who has enjoyed the Rupert Granary in recent years. When we pulled up the floorboards in this barn, we found many remains of dinners consumed there. It appears that chicken dinner was a favorite of the fox family that lived under this barn- much to the chagrin of the farmer!

Stay tuned to find out where this beautiful little granary is headed for its next phase of life and, as always, let us know if you are interested in restoring and preserving a barn of your own.

1 thought on “Dismantling the Rupert Granary”