I feel like a young fella who has discovered a buried treasure! After so many years of working with timber frames and old barns, the magic of each newly discovered frame never dies!

This past week, I got to work on an old Gunstock Timber Frame whose labeling system goes back to the 1500s and earlier. Now if we were in England, this might not be such a big deal. But we’re talking about a labeling technique that was brought across the Atlantic to rural Vermont – and this timber frame is a real, rare find in our community!

Here are a few photos that show the details of the beauty – the handicraft of an expert timber framer who lived in New England centuries ago.

In the photo above, we can see the labeling technique of the old world joinery, brought to New England where it was used until the mid 1800s.

Below is an excerpt from  Richard Harris’s book, “Discovering Timber-Framed Buildings.” which explains the old world joinery and labeling system. The first picture below shows the traditional lettering system used to label timber frames. The second picture shows a detail of the joinery that this original timber framer used. 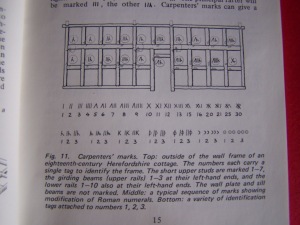 And below we see the frame I worked on this past week – an up close photograph of the joinery on this beauty of a frame! This frame is classified as a Gunstock frame because the posts that hold it up are tapered from bottom to top in order to allow two timbers to join and overlap at the top of the post. The top plate timber – or rafter plate – will fill the gap on the right side on raising day.

Below is a picture showing the principal rafters of the frame.

The girts – or  long timbers – on this frame are made from Elm and Chestnut. The midbay timbers were originally 30 feet wide, but restoration allowed 25 feet. It was hard to tell what wood it was until the cutting, but the familiar pungent smell helped me recognize the Elm. 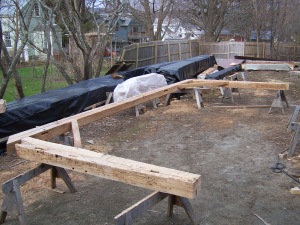 The picture below shows the gable (or end wall) section of the frame. Some new timbers have been added, and will age nicely over the next 200 years.

Gable of the Gunstock Timber Frame

This final picture shows the frame’s roof structure. We are assembling the original half of the roof frame before adjusting it to new dimensions.

And here we have it – another piece of history uncovered.  A fine example of “post medieval construction”,  when buildings where built to last for centuries.

I have several restored old barn frames in stock and erected at my shop. You are invited to plan a visit to walk through them and get a feel for what they could become. See them online first: http://www.greenmountaintimberframes.com/#!available-frames/cqps